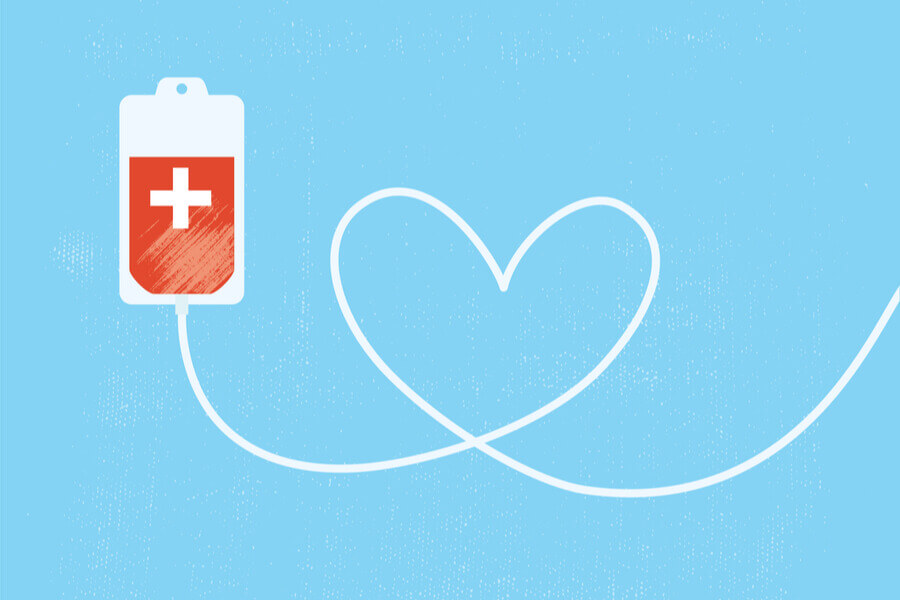 Did you know that you can make money donating plasma? Many people donate plasma to earn up to $400 per month! Not only will your plasma donation help people, but this is a great side hustle to boost your income!

Interested? Then continue reading this post where I’ll show you how to donate plasma and how much money you can expect to make!

Plasma is the largest part of your blood – 55% of blood is plasma, 44% are red blood cells, and the remaining 1% are white blood cells and platelets.

Plasma is the clear, straw-colored liquid portion that remains after everything else gets removed your the blood.

Here’s how plasma is separated from the blood when you donate:

How Much Can You Make Donating Plasma?

How much you get paid donating plasma depends on a few things, including how often you donate each month.

Generally, you can expect to make around $20 to $50 each time you donate. The amount ranges because the FDA sets the guideline on how much plasma you’re able to give based on your weight tier:

The more you weigh, the more plasma you can donate.

Another factor that gets calculated in your potential compensation is your blood type. People with type AB blood are in very high demand. That’s because AB is the only universal plasma and can be given to patients of any blood type.

This is different than normal blood donations where type O blood is considered the holy grail due to its universal status.

Jim Wang of Wallet Hacks shared how much one of his readers earned when she donated eight times during the fall of 2020:

Plasma is a competitive industry.

Just like how credit card companies and banks offer sign-up bonuses, some plasma donation centers will pay a bonus for first-time donors. For example, you might be able to make $600 in your first month versus the typical $400 monthly payout.

Many donation centers also run promotions where you get paid more if you donate more often.

These plasma bonuses and promotions vary depending on where you live – start by googling “first-time plasma donor bonus” and check what’s available near you.

It took me only a couple minutes of searching to find plasma donation centers like ADMA Biocenters offering $650 the first month and CLS Plasma paying up to $1,000 in the first 30 days (and an extra $10 by using this coupon).

It’s a little weird using coupons to make money, but this is the world we live in 🙂

How To Find Plasma Centers Near Me?

Now that you’ve learned about how to make money donating plasma, maybe you feel like you’re ready to take the next step and donate!

But where should you go to get the most money for your time and plasma?

Before you hop back to Google and search using a phrase like “best plasma donation center near me”, I’ve got you covered!

The top plasma centers that pay the most are listed below:

In the United States, you can find them in 41 states, such as California, New York, Texas, and Florida.

First-time donors can receive up to $1,000 in their first month and get paid between $20 to $45 per donation. Like other plasma collection centers, CSL Plasma will pay you via a reloadable debit card immediately after your plasma donation.

CSL Plasma also has a donor loyalty program called iGive Rewards which lets you receive points for every completed donation. You can redeem the points anytime for cash or merchandise through the rewards portal.

Grifols was established in 2003 and is based in Los Angeles, CA. The company has over 147 locations across the United States under different brands (Grifols, Biomat USA, Interstate Blood Bank, Plasma Biological Resources, and Talecris Plasma Resources).

Donors can expect to earn $40 to $75 per donation. Grifols also has a special promotion where they will also compensate you up to $1,000 as a new donor. The amount varies by specific location.

Octapharma Plasma is a U.S.-based company that runs more than 80 donation centers across 34 states, including Massachusetts, New Jersey, and Washington.

Like their competitors, Octapharma Plasma has few donor promos available like the $700 new donor offer. However, the promotions can’t be combined and bonuses vary by location. You can contact the closest center to confirm what you’re eligible for.

They also have a referral program where you can get up to a $150 bonus for each new donor you refer:

You can invite your friends through this online form. Your friends have to be first-time donors at Octapharma and they must donate at the same center as you.

KEDPLASMA has 18 donation centers located in the southeastern United States:

KEDPLASMA has a different payout system for new plasma donors.

After that, the payment schedule switches to their standard schedule:

All compensation is loaded onto a Wirecard prepaid debit card. You can also enroll in their donor loyalty rewards program called kedrewards for additional bonuses.

BPL Plasma has a straightforward compensation plan. They will pay you a flat $50 per donation, with a maximum cap of $400 per month.

Additionally, like other plasma donation companies listed here, they also offer plenty of promotions to take advantage of. Keep an eye out on their website and Facebook page. They regularly announce new promos there.

For example, in the past, BPL Plasma offered an extra $15 bonus on your 6th donation and cash bonuses for referring friends.

Getting paid for your plasma at BPL Plasma is the same process as others – they will pay you with a prepaid debit card.

DonatingPlasma.org is a website set up by the plasma donation industry to help educate potential donors.

While DonatingPlasma.org isn’t itself a plasma donation company, they have a plasma center search tool you can use to find a center near you.

This is helpful if you live in a state where none of the top plasma donation companies mentioned have a presence. There are several smaller plasma companies that may be in your area.

Who Can Donate Plasma?

In order to donate plasma, there are three requirements everyone needs to pass.

First, you need to be between 18 to 69 years old. Keep in mind states can have their own laws on plasma donation. For example, in the state of Nebraska, you need to be 17 or older. Some donation center also caps the maximum age to donate at 65.

Second, you need to weigh at least 110 pounds and not more than 400 pounds. While a minimum weight seems arbitrary, it’s there to ensure you can physically withstand the process. I couldn’t find why the maximum weight at capped at 400 pounds.

And last, you need to be in general good health.

Many of the rules that exclude people from donating plasma is the same as red blood cells donation.

This includes not being able to donate while you’re pregnant, having an illness that can be transmitted by blood (e.g. HIV/AIDS), inking a new tattoo, or a recent piercing on your body.

What Do You Need To Bring To Donate Plasma?

Every time you donate plasma, be sure to bring a valid photo ID, proof of your Social Security Number, and proof of address.

Proof of address doesn’t have to be a separate document. If you bring your driver’s license, that’s enough to fulfill both the photo ID and proof of address requirement.

How Long Does Donating Plasma Take?

As a new plasma donor, your first donation will take longer than future visits – about two hours. That’s because you’ll need to fill out paperwork and answer some questions by the plasma center staff.

Return visits should only take about an hour to an hour and a half.

If you’re bigger in weight, the process will take a tad longer too because you have more plasma to donate. This isn’t a bad thing though since you’ll be getting paid more.

Keep in mind the process isn’t complicated and doesn’t require you to just sit or lay there. Bring your phone to stream your favorite shows or take a book to read to pass the time by.

How Often Can You Donate Plasma?

I sound like a broken record, but this also depends on the plasma company you donate to.

Roughly speaking, most private plasma centers will let you donate up to two times in seven days with at least one day in between. American Red Cross only lets you donate once every 28 days.

To calculate how much you can make, I would use two donations a week as a baseline. That’s what the plasma companies do when they come up with statements like, “donate plasma and make $300 a month.”

What Are The Side Effects Of Donating Plasma?

While donating plasma is generally very safe, some people do experience side effects. Many of these side effects are similar to donating blood.

The process removes fluid from the body and some donors can experience dizziness or lightheadedness. Drinking plenty of water before you donate can help alleviate these symptoms.

A percentage of donors can also experience bruising or tenderness around the needle injection area. If you get flu shots and feel a little pain at the injection site, that’s the best comparison to how you might feel donating plasma.

Both side effects are temporarily and usually goes away relatively quickly.

You can earn money fast by donating plasma. It’s a great side hustle and a legit way to help pay your bills while helping others in need.

In the U.S. alone, around 10,000 units of plasma are needed every day. This number is probably a lot higher now with the COVID-19 pandemic. There’s a huge need for donations.

It’s rare to come across a win-win side hustle. By donating your plasma, you’re making money while saving lives at the same time.

It doesn’t take up too much of your time either. You only need to spend two hours a week on this so it’s an easy way to earn extra income – unless you’re afraid of needles like my brother 🙂

Note To Brother: I hope you’re not reading this post!

I’ve read some comments online about whether or not donating your plasma is ethical. The New York Times also wrote a story about whether money has tainted the plasma industry.

In my opinion, it is ethical and I don’t see how it wouldn’t be. It’s your own blood and you have the right to decide what you want to do with it.

If the idea of selling plasma for money bothers you, no problem – don’t do it. You can donate your plasma for free though the American Red Cross. Call their toll-free number at 1-800-RED-CROSS to schedule an appointment.

If so, share your experiences in the comments section. How much did you make? Was it worth it?