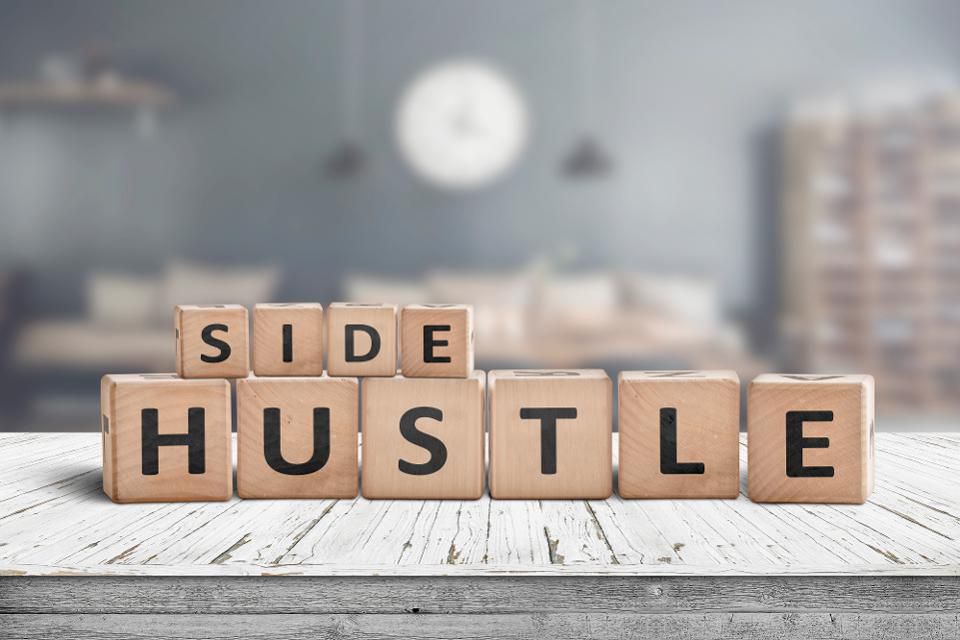 I was extremely fortunate to have parents who made education a priority and paid for both my private high school and college tuition. It’s shocking to see how much tuition and fees costs, especially today.

They never spoiled me though. To teach me the value of a dollar, as soon as I turned sixteen, I worked 17 hours at my local supermarket bagging groceries. EVERY weekend. To make matters worse, my car insurance back then was like $3,200 a year. That was like… 75% of my yearly paycheck!

All of this made me very entrepreneurial at a young age. The internet was like brand new, and it opened a whole new world for kids to find ways to hustle for money.

I found a ton of side hustles and wanted to share with you what I did 20 years ago (holy batman I’m getting old)!

This post may contain affiliate links, meaning I get a commission at no cost to you if you decide to make a purchase through my links. Visit this page for more information. The content on this page is accurate as of the posting date; however, some of the offers mentioned may have expired.

5. AllAdvantage and Other “Pay to Surf” Toolbars

If you were on the internet in the late 1990s, besides EVERYONE using America Online and AOL Instant Messenger, you knew about AllAdvantage.

AllAdvantage was considered the first internet advertising company using what was called a “pay to surf” business model. The company had a toolbar that you would download and it would pay you 50 cents an hour for surfing the web. Can you believe that? It’s equivalent to the modern day idea of paying people to use Facebook.

On top of that, AllAdvantage would pay users a drip referral where for every friend you referred, they would pay you something like 25 cents an hour of your friend’s surfing time. This led to the mass adoption of spam mail – people trying to get everyone to sign-up under them.

It was a big reason why spam mail became so popular… there’s your spam mail knowledge nugget of the day.

A bunch of friends and I downloaded this onto our high school’s library computers and used a program called Jay’s Mouse Mover to stimulate web surfing, raking in thousands of dollars per month.

Alas, this lasted about a year before the dot-com bust made this and other programs like it (GetPaid4, Spedia) go belly up. But nowadays, you can earn money passively by sharing your unused internet through apps like Honeygain.

If you were an AOL dial-up user back in the day, you’ve probably played games that were all text. Yes young’un, you had to read. The internet was too slow for anything else.

Once dial-up modems went up to 56.6kps, it made online games with graphics possible. Enter EverQuest and Asheron’s Call. They were two of the first non-text MMORPG (massively multiplayer online role-playing game) available.

I was a beta tester of Asheron’s Call and bought it the first day of release in 1999. In fact ::super nerd hat on::, I created one of the top online kingdoms of the time.

I played so much at night that my mom would pick up the phone to disconnect my internet… you probably have no idea what I mean by that. Ha! But enough of that.

I had a light bulb moment one night and thought to myself… “Can I sell these virtual loot (items) I get in the game? What about on that new site, what’s it called, eBay?”

It turns out I can, and I did. Instead of keeping a sword, shield, or magic scroll I found on a monster I killed, I sold it on eBay.

Ninja Fun Fact: One of my first feedback on eBay was from Asheron’s Call!

For a 17-year old it, the money was pretty good for playing video games – not huge money by any means. I wonder if I played today, would I already have made it by streaming my play on Twitch?

I discovered this site called Fatwallet back in 2001-2002. It had a message board dedicated to finding hot deals, which included posts about dealerships paying you to test drive cars.

The main benefit for dealerships is to get people in, test drive a car they were interested in, and have them commit to buy after a great experience.

But I was a college student, buying a new car was the last thing on my mind. I wanted to dine at “fine” establishments like the Olive Garden and not have to eat cafeteria food every day. I needed money, not a car!

So I went to test drive cars… A LOT of cars. I would plan out my side hustle route to stop by at dealerships starting from northern New Hampshire and end up all the way down in Boston.

Eventually, some of the car salesmen knew I wasn’t in the right demographic to sell to. Instead of wasting their time and my time test driving cars on the highway (although the Mustang was pretty fun), they would just sign my form as soon as I parked into the dealership lot.

Hey, I like efficiency! They just reduced my cycle time by 95%. I can do more with less time!

Like all good things though, dealerships started to wise up and put certain requirements in the terms (must not have taken a test drive in the last 3 months, blah blah blah).

Back before former President Bush effectively banned online gambling and forced degenerates like me to sign-up for an off-shore poker account, Poker Stars and the likes were the rage.

I’m a pretty good poker player (thanks Dad) and made decent coin playing Sit and Go and multi-table tournaments. Still, I was in college betting on $1/$2 tables. You’re not going to get rich off of that.

The real beauty was all these sites had humongous sign-up and referral bonuses. Deposit $500 and get $500? Okay! The only hurdle to this side hustle was that you had to bet using the bonus money before you can withdraw it.

If you were smart and played low-risk games (small cash poker games and Blackjack), it wasn’t too hard to clear the money.

How did I come up with the business idea?

When Microsoft first came out with Windows XP, they held a launch event at Massachusetts Institute of Technology (MIT). It was POURING that night though so the place was dead by the time a few college roommates and I arrived.

At the end of the event, one of the Microsoft representatives handed us a box full of Windows XP software CDs. With no one showing up, they had too many leftovers. We each only needed one to replace our Windows 98 operating system though. What do to with the rest?

Oh yeah… eBay! We sold every single copy over one weekend for like $400 each. I can’t remember how many we had, but it was enough not to eat ramen noodles anymore 🙂

To make a long story short, it made me think of how to replicate that business model. That culminated to founding my first company, Azurik, an ecommerce business. I bought technology items at a volume discount and resold it for less than what Best Buy could.

After running it for 4 years, I sold it to a large Fortune 100 company. The money paid for my first house, my first new car, and a supercharged retirement account.

It was hard work, I hustled like crazy during that time; studying during the day and manning my computer at night… my college girlfriend at the time probably felt really neglected (sorry!).

But I was also in the right place at the right time. I got lucky. Technology products are commoditized now with razor thin margins – you couldn’t replicate it today with tech.

I’ll forever be fond of this time though. As college kids went home and worked their summer jobs, I paid my best friend not to work and go to the beach all day. That didn’t hurt him – his lazy butt is now animating some of the coolest movies at Dreamworks Animation:

Anyway, back to my numero uno. Azurik was definitely my home-run hitter of my 20’s. The ultimate hustle. I still look back at those days fondly. A college kid, making $1,000+ every night. It was a crazy time!

Most of these side hustles (and a main hustle) aren’t viable today. Times have changed and we have to change with it. Like Bruce Lee once said, “be like water”. To be successful, even when it comes to hustling, you need to know how to adapt.

That’s why at The Money Ninja, I aim to make my posts relevant to EVERYONE, regardless of where they are in their financial journey. I know it’s not a one-size-fits-all, not everyone can do the big deals like the Chase Bank $600 Account Opening Bonus, but perhaps my post about the 9 Best Cash Back Apps That Will Save You Money is doable.

Speaking of adapting, I plan on writing up on what you can do as a side hustle today, so stay tuned! In the mean time, what things have you done to make money on the side?